What is a mala?

A mala is originally a prayer chain or rosary. For thousands of years it is carried and used by Hindus and Buddhists during puja (prayers) and meditation to count mantras. Many wear there mala also during meditation and don’t count with it but because of the specific energies.  Next to that, a mala is a symbol of compassion and also used as a an amulet.

What is the jewerly made from?

Rudraksha jewelry is made from Rudraksha beads, sometimes combined with gemstones, gold and silver. Grown on trees, these seeds are inside of a fruit resembling a blueberry. The trees are found in Malaysia, Southeast Asia and in the Himalayas in India and Nepal. Our authentic beads are sourced from sustainable plantations in Southeast Asia.

What does Rudraksha mean?

The name rudraksha stems from Hindu mythology and means “the eyes of Shiva.” It is widely believed that the god meditated on the welfare of mankind and emerged crying tears of compassion. Upon hitting the earth, the tears crystallized to form these trees.

What are the healing properties of Rudraksha?

There are many healing qualities associated with wearing rudraksha beads. Mostly they are used in India for different to treat diseases. In the west the Rudraksha are not known so also not used. Ancient Hindu scriptures have proclaimed that the beads bless one with peace of mind, protect against evil doers and spirits, and grant nirvana, moksha, peace, and prosperity.

Are there different kind of Rudraksha?

The rudraksha bead varies in speices and size. Mala Spirit only uses the one with the higher frequencies. The size of the beads vary in size from 3 mm to 40 mm. The smaller beads are the most rare. The beads have a very long life, sometimes known to last up to eight generations. Most importantly, each bead has a number of facets or serrations on the face, which are called mukhis and or mukhas. The number of mukhis range from one to 21, with each amount carrying different meanings and benefits. We mainly use five mukhis, which is the bead that represents lord Shiva, and is the most commonly sought after.

How is the jewelry made?

Each piece of jewelry is hand-made in Bali. One of things that makes our malas unique is that the beads are received without holes in them, fresh off the trees. They are drilled from the top, where the bead was attached to the tree, to the bottom. The bead is also threaded the same way to maintain the prana, or energy.

What is the the significance of having 108 beads in my mala?

All our malas are made according to a specific number of spiritual beads: usually 108. Some mala contain 2 x 108 beads and some malas 72. The extra bead that anchores the mala, named the ‘guru bead’, is not counted. This bead is used to simplify the counting of mantras during meditation and symbolizes the crown chakra.

The number 108 is significant for numerous reasons. Some believe that there are 108 stages on the path of the human soul. Also, there are 108 human sins in Tibetan Buddhism. Therefore, 108 times reciting the mantra would be a sacred activity. Shiva Nataraja danced his cosmic dance in 108 poses. Krishna danced with 108 ‘Gopis’ (cow wives) and later married 108 women. Many stages of Buddhist temples have 108 steps.

The number 72 is also a spiritual number, for the following reasons: Indian architecture can be an arithmetic sequence based on the number 72. For example, the main Krishna temple in Dwarka is built on 72 pillars and the upper structure of the temple complex in Java, Borobudur, is divided into three terraces, on which 72 openwork stupas are placed.

How to use a mala?

Malas are often used to help count mantras during meditation. What’s a mantra? It’s a word or sound repeated to aid in your concentration during meditation. To count your mantras, hold your mala in your hand, and turn each bead with your thumb. Reaching the guru bead during meditation, the bead that dangles from the mala, signals a time for reflection. Do not continue over the guru bead. Instead, turn around and continue in the other direction.

How do I care for my rudraksha jewelry?

Rudraksha beads are sacred and need to be treated with respect and care. We suggest you wash them every so often to remove dirt and dust, and to oil them with coconut or sandalwood oil for preservation. Due to your natural body oil, they will turn darker with wear, which is the desired effect. It’s best to remove the jewelry when sleeping.

Can I wear my mala at night?

Will my rudraksha jewelry look the same as in the picture?

Will the rudraksha jewelry cure my problems?

While many believe in the healing qualities of rudraksha beads, as well as the benefits from certain gemstones, we do not intend for these products to treat, cure or prevent any disease. The results are the sole responsibility of the wearer. Please consult your own physician regarding the treatment of any medical condition. This information is not a replacement for a thorough consultation and examination from a licensed health professional.

My mala does not fall equally smooth, how can I fix it?

All jewelry is hand-made, hence some beads of a mala can be knotted a bit too tight. By wearing the mala it will eventually hang smoother naturally. You can also work the beads to loosen them a bit by massage by gently making rotating ‘washing movements’ to a row of beads.

How is the hanging length of my mala determined?

Can i return my mala?

Rudraksha jewelry that has been worn, including both bracelets and malas, cannot be returned as they carry very specific energetic qualities. However, jewelry that has been broken due to the “karmic” cycle can be sent in for repairs.  If the mala or bracelet is older than 6 weeks we send you a return from. With this return form you can send your piece to Aum Rudraksha for repair. It may take between six to eight weeks to be returned to you. The repair is free of charge.

Do you give guaranty ?

Malas that are broken (e.g. as a result of breaking a “karmic” cycle) can be sent for repair to Bali. If this event happens within 4 months after your purchase, we will take care of the shipping to Bali. After repair, the mala will be returned to The Netherlands. The shipping costs to your address are not covered, the repair is free of charge. 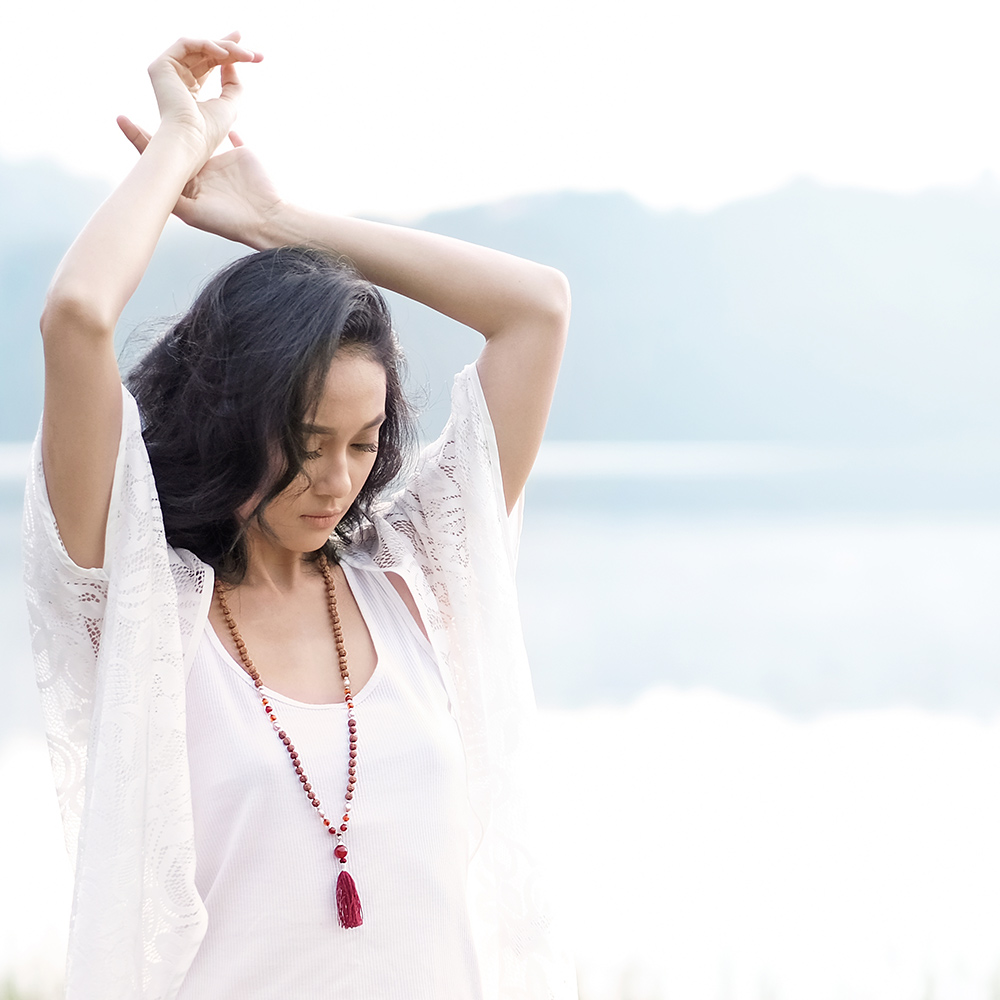 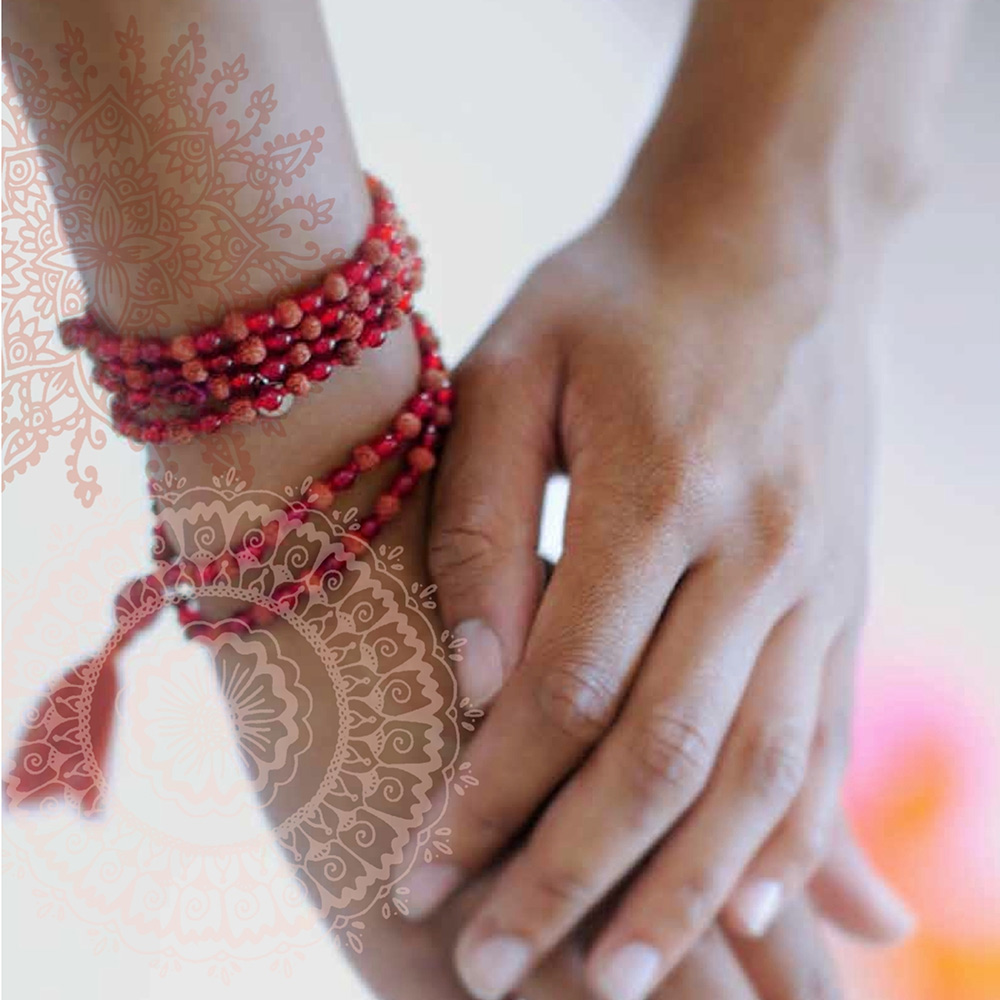 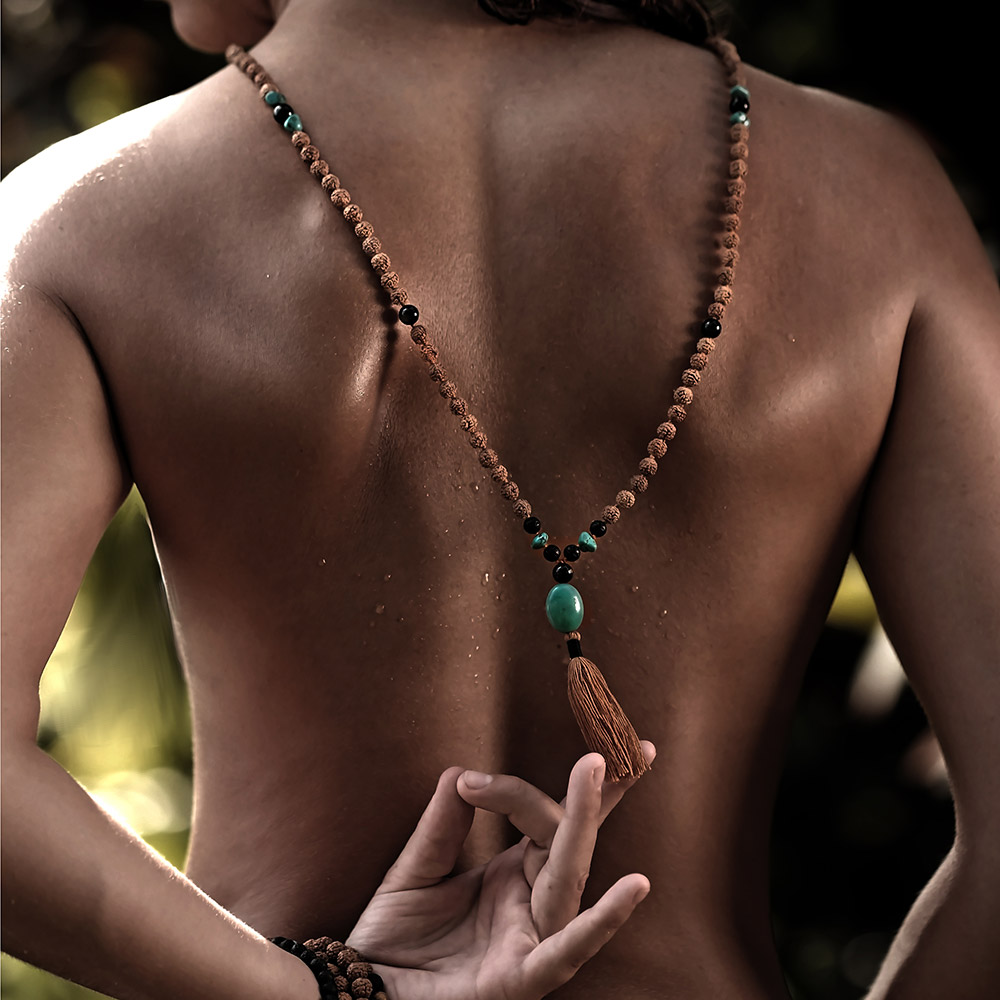